It's Time to Take a Stand for Models' Rights

Models' rights activists are celebrating what appears to be a big step in the right direction: Vogue UK has signed a 10-point code of coduct with UK trade union Equity to dictate the treatment of models on set.

Taking a look at the list removes a lot of the glamour that some of us might associate with the modeling industry. To most of us, it would seem like common sense that a model shouldn't be required to work for five consecutive hours without break, that you would have to warn a girl in advance if there will be any nudity, and that "no one would ask or impose on the model any action or activity which is dangerous, degrading, unprofessional, or demeaning to the model."

But listen to the horror stories from even the biggest names in the industry and you might be surprised. In the U.S., models are treated as independent contractors and are thus unable to form a union or have any sort of protection against minimum wage violations or sexual harrassment.

As supermodel Coco Rocha explained, "When I started in this industry, I was told that I always had to say 'Yes,' even if I felt uncomfortable. And then I realized, 'Wait a second. Hold on a minute. I have rights just like anyone else.' And I thought that models needed to own these rights ... If she feels like she shouldn't do nude, why must she do nude?"

With sopport from models like Coco, the CFDA and Vogue at large has taken up the mantle of models' rights through the creation of the Health Initiative last May. But here's the thing: saying you're going to take a stand is very different than actually taking a stand. In the Health Initiative mantras, it says that all of the different international Vogue publications will not "knowingly" work with models under the age of 16 or "knowingly" cast girls who appear to have an eating disorder. But what does that even mean? It basically provides no culpability for the magazine if an underage girl is cast. Since the Initiative started, Vogue Japan and Vogue China have already admitted to booking 14-15 year olds for a shoot. Guess what? They said they didn't "know."

The real issue is that as noble as the Health Initiative is, it doesn't do anything to change the attitude in the industry. These standards do not actively change the expectations for models' sizes. In fact, it seems like fashion editors are quick to pass the blame onto others. In a roundtable discussion, Vogue fashion editor Tonne Goodman said, "When you're dealing with a sample size, as it comes to Vogue Magazine to be photographed, I'm actually at the end of a process that has preceded me." But, as the most influential magazine, you'd think that Goodman and her fellow editors could just demand larger sample sizes. Somehow, I imagine that designers might be more willing to cooperate if they risked losing press. But the problem is that these editors talk a good game but aren't willing to go beyond it. Just think: Vogue UK is the first to sign any sort of trade union agreement gaurinteeing the rights of models.

It's time that the fashion industry stopped playing the blame game. Or, as one casting agent so bluntly said, "Let's stop treating models like greyhouds we plan to shoot after a race."

These women go to such extreme lengths and will put up with so much because they realize how replacable they are: gone are the days of the 80s supermodel who could demand respect. 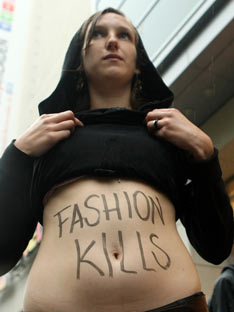