The city that never sleeps locks itself inside its apartment and remains stuck on the island, possibly for days. 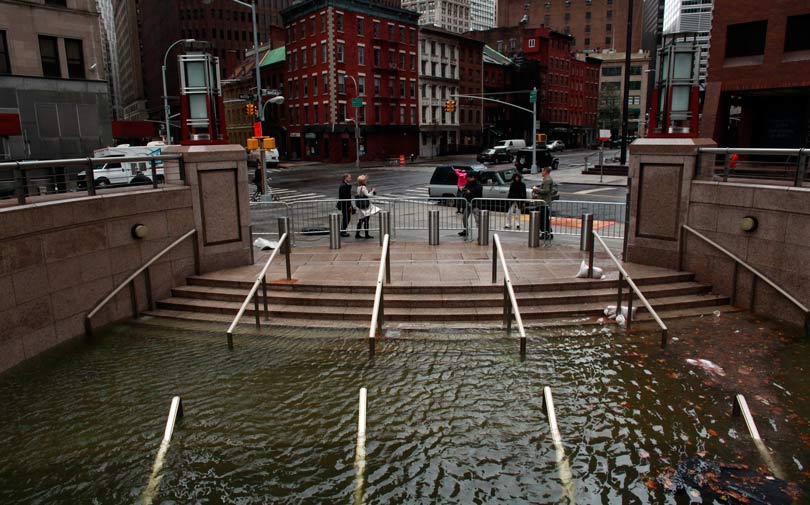 This morning, The Daily Beast wrote, "If 9/11 was about what we saw, then 10/29 is about what we heard," describing the none stop sirens and squealing wind that engulfed a people stuck on an island with no electricity and little internet service to speak of.

For the city that never sleeps, a total shut down was in effect, forcing even the most reluctant into their tiny apartments for a night of watching waves of water creep onto their usually dry streets and seeing neighborhood after neighborhood go dark - the only sounds to appease them not coming from the so common rumble of the trains below, but from the ambulances roaring away against the wind. The only sound that humanity was in fact fighting back.

New Yorkers have a penchant for ignoring dangerous situations. After all, living in this city is about as dangerous of a lifestyle as they come. The cabs that refuse to stop, the trains that buzz by merely a foot from where you stand impatiently waiting, the creepers that can come out at night, all of these add up to a less than safe lifestyle. But, if we have nothing else, New Yorkers always rely on one another. There is nothing scarier than waiting in a train station or walking a dark street alone, even if the only other company you have is another non-sleeping New Yorker you have never met, and will most likely never see again.

It's a juxtaposition of a world where common suburban rules of what is safe and what isn't are typically thrown to the wind in exchange for success, fame and fortune. And when natural disasters strike, we head out to the beach to see the waves that remind us we don't live in a concrete jungle, but a real jungle where even the concrete streets we have come to trust can be subject to overnight destruction.

In the aftermath of the storm that produced 13-foot surges covering lower Manhattan and flooding train tunnels, cutting the boroughs off from one another, it may be days until things are back to normal. But for the New Yorkers in us all, each of us checking our watches, the news, our Twitter updates, waiting for the next announcement that our sleepless lives can be put back in motion and that a storm, even of historic proportions, can not stop us from chasing our dreams in the city where dreams come true, we will all be on the edge of our seats.

Congratulations New Yorkers, and all East Coasters. You have survived Sandy. May you never have to surrender your hectic plans to the hectic winds and surges of a storm of her strength ever again.

From out here in Brooklyn, until I can see you all in Manhattan again, be yourself, be different, and stay safe and sane out there!

Love Stories from the Team