Get ready: The Hunger Games is amping up the drama with new promo images that will make you drool

The second installment of the "Hunger Games" might not be released until November 2013, but the Lionsgate team is already starting the publicity push. Last week, they debuted their series of "Capital Couture" portraits on instagram: regal portraits of the series' most beloved characters at their sartorial best.

It began with Effie Trinket, the Capitol-born chaperone designated for District 12. For those unfamiliar with the series, Effie represents the image of the Capitol in every way: her look is entirely over the top, with bright pink hair and her crazy makeup. Like everyone in the capitol, Effie is always seen in clothing that verges on unwearable. The contrast is put into sharper relief by the apparel of the people of the districts: extremely sparse and bare bones.

But despite the fact that Effie is entirely fooled by the political message of the Capitol and fails to recognize the inequality suffered in the Districts, she isn't a character you can really HATE — especially when she looks this fabulous in Alexander McQueen couture. The thing is, reading the books, you can't help but hate the Capitol citizens: they're entitled, spoiled and they watch children die for sport. But on film, with their whimsical costumes and make-up, that seem more to be characters straight out of Wonderland. You might not want to take on their morals, but you'll wish you could test out their wardrobe for the day.

So check out these looks for your Effie Trinket moment.

Thankfully, you haven't been named tribute. Relish your freedom in this cranberry chiffon party dress with ruched layers. Like Effie, you'll be taking a risk with the bold color, but this version is much more streamlined and practical for your everyday life.

In the Capitol, it's all about color, color, color. This studded ruffle bracelet is simple, but brings the drama in it's hues: pink, red, turquoise and mint green. The leathery material is perfect to add edge to a cocktail dress like Effies or to top off a casual day look.

Layer on the Drama

Effie's portrait (and her persona) is all about adding more and not holding back in fashion. Layered with a few other bracelets, this cuff is bold and fun — whether you choose the version in black or red. When you're layering bangles and bracelets, don't fuss about matching, but aim for a variety of colors, shapes and sizes.

Peeking out from under Effie's gorgeous ruffled gown is a geometric triangle necklace like this one from Lady J. Made with five V pendants plated in 14k gold and gunmetal on a brass chain, this piece is original and sure to pass as every day wear.

It might not be practical to wear rings on each finger like Effie Trinket — after all, you do need to get through work, school and your everyday life. Instead, opt for one oversized statement ring that will look just as dramatic. This textured "hook" ring is made of oxidized silver, and the swirls mimic the whimsy of the Capitol. 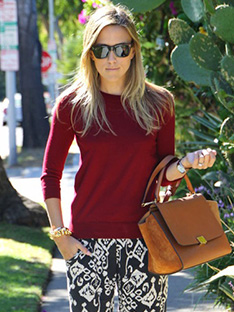