This model is much more than a clothes hanger. Coco will quite literally dance a jig for fashion

Let me tell you: If I were a contestant on the new Oxygen TV show "The Face," I would absolutely want to be on Team Coco. Yes, Naomi Campbell is the queen of the runway, and yes, Karolina Kurkova has made millions as a Victoria Secret angel. But can they make 50 poses in 30 seconds? Or tap dance in a national ad campaign? I think not.

Coco won my heart when she burst out on Jean Paul Gaultier’s runway Celtic-step dancing in a tartan kilt. You often hear that the "age of the supermodel" is finished — despite Tyra Banks’ attempts to create a new one each season on "America’s Next Top Model."

Nowadays, actresses dominate fashion covers and runway models change every season. To me, Coco is one the few true fashion personalities working the runway: she isn’t afraid, as Shoptiques’ motto implores, to be herself or to be different.

To get a piece of Coco’s signature quirk, try these looks.

Just like Coco, you can mix sheer and beading with this cardigan, perfect to throw over a simple black cami or a little black dress. If you want to add some color, opt for fuchsia or creme, which will bring dimension to the sheer fabric.

Coco’s dress has angular, albeit triangular, shapes that work on the red carpet, but might be overwhelming for your everyday ensemble. Instead, opt for a softer look with this chiffon and silk top with a sweetheart neckline.

Emulate the intricate detailing of Coco’s dress with this trendy peplum dress. Worn with heels and a colorful clutch, you’ll look chic for any occasion.

Everyone loves some sparkle. This dress flatters all figures with the three-quarter-length sleeve and ruched fit. With Valentine’s Day coming up, you’ll want this in your closet.

Coco opted not to wear much jewelry with her look — a wise decision when you’re wearing a long-sleeved, runway gown on the red carpet. For those of us at home, though, get inspired by the beading and have fun with your jewelry. These earrings evoke a vintage aesthetic with the paisley base. 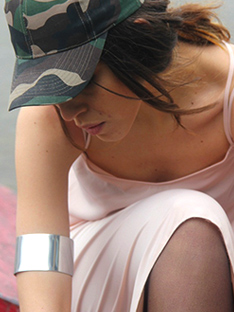 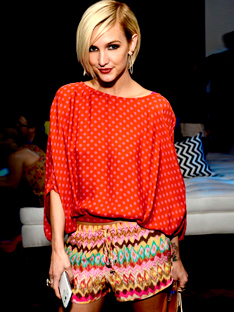