The English actress has us tickled pink in a bright tunic top layered over chic, tapered trousers

Between her portrayal of the title character in a 2006 TV mini-series based on the gothic novel Jane Eyre, and her role in the upcoming adaptation of the Russian tragedy Anna Karenina, English actress Ruth Wilson has built up quite the melancholy resume.

This dark streak was not reflected in the outfit Wilson wore to a recent awards ceremony. The actress paired an electric pink tunic with a pair of neatly tapered trousers. The strapless, slit-up-to-there tunic was equal parts sultry, and playful with its girlish hue.

The trousers struck a conservative note, but were counterbalanced by the addition of a sharp, stiletto heel. A simple envelope clutch and oversized gold bangle were Wilson's sole accessories.  Makeup was also minimal, with the exception of a cherry red lip that should have waged war with the actress' aggressively pink top, but somehow provided the perfect, incongruous finishing touch.

This eye-catching pink blouse shares the electrifying style of Wilson’s top and its cut-out shoulder detail has the same subtly sexy effect as the thigh-high slit.

A classic maxi dress is an obvious alternative to Wilson’s unusual floor length tunic. The semi-transparent skirt is another option for those looking to show some serious leg.

These prim, cropped pants provide the best of both worlds. From the hip down, they are the same conservative shade of black as Wilson’s trousers, but they offer a pop of bubble gum pink at the waist.

A laid-back take on the classic tailored trousers, these cropped pants roll at the ankle with a buckle closure to hold everything in place.

A shimmering dose of wrist candy in the form of an oversized gold bangle is the perfect statement-making accessory.

A smart patent leather clutch adds a little extra shine to any outfit. 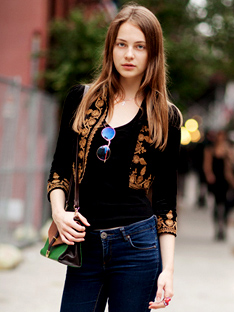 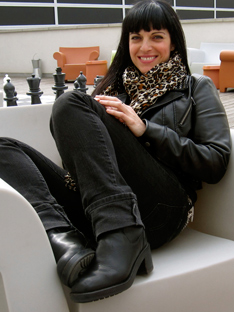